Foods or Ingredients That Can Cause Cancer

1.     Hydrogenated oils are vegetable oils. Chemicals are added which create a higher level of omega-6 fatty acids that lead to heart disease and cancer. You want to balance this and get more omega-3 oils as a daily supplement in your diet.

2.     Foods that are highly salted, pickled, or smoked contain nitrates. These act as preservatives as well as adding color to meat when ingested.  Our bodies convert them to N-nitroso that is associated with a greater increase of developing cancers.  Smoking meats and nuts absorb tar that is another known carcinogen. Pickled foods are high in salts that have found to increase higher risks of colonrectal and stomach cancers.

3.     Processed white flour is another common ingredient found to cause cancer. Processing mills will bleach the flour with a chemical called chlorine gas to make the flour whiter. White processed flour has a higher glycemic rate that elevates blood sugars and insulin levels. Cancer tumors throughout our bodies will thrive and rapidly grow with high blood sugar levels.

4.     G.M.O.’s ( Genetically Modified Organisms) have been introduced into all our foods over the past 30 years. These are foods with added chemicals or arranged genetics to allow for faster growth within harsher climates, low water tables and surrounded by insects.  The Europeans have found GMO’s to damage the immune systems in humans and create pre-cancerous growths. Several countries have banned their use in Europe. The FDA has no testing procedures for GMO foods. Unfortunately, almost all grains, including soybeans, wheat and corn, have been grown via GMO’s in the United States. GMO’s do not have to be listed on food labels. Look for labels that state the food is GMO free. 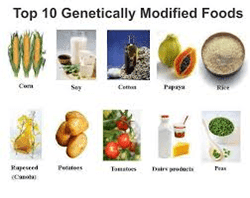 5.     Refined sugars will spike and increase insulin levels. Fructose and High-Fructose Corn Syrup (HFCS) are a cheap, common sweetener which are used in many of U.S. foods.  Cancer cells metabolize and grow rapidly with these sugars.  Cakes, pies, cookies, soda’s, juices, sauces, and cereals are some of the foods loaded with these sugars.

6.      Artificial sweeteners are used in all of our foods in many ways. They are suppose to prevent weight gain, but have instead have been shown to cause the opposite.  Aspartame is an artificial sweetener used in soda, coffee, cereals and other products. When it is ingested, it breaks down within the body as a toxin called DKP that have led to brain tumors, birth defects, heart problems and convulsions.

7.      In a 14-year study of over 200,000 women, it was found that post-menopausal women who drank one drink per day or less had a 30% increase in breast cancer rates compared towomen who did not drink at all!  So ladies, try to limit alcohol to no more than one drink per day.

8.      Red meat is good in small, infrequent amounts; however, daily small amounts led to an increase of 22% men dying of cancer and a woman’s chance by 20%.  Eating lots of red meat increased the risk of breast, prostate, and colon cancer.  Grass fed beef is safer to eat because it contains conjugated linoleic acid that protects against certain cancers. Thus, you can still enjoy an occasional T-bone. Perhaps, once or twice a month would be a better choice rather than weekly amounts.

9.     Perhaps the most frightening news is the ingestion of non-organic fruits have been found to contain pesticides such as atrazine, thiodicarb, organophosphates, as well as high nitrogen fertilizers.  Atrazine is banned in Europe. “An apple a day keeps the doctor away!” This is an old saying that no longer holds true. Apples can contain 98% pesticides while fruits about 90%. These fruits include oranges, strawberries, and grapes.  The sad part is washing the fruit does not remove 100% of the residue. So be careful as to what you and your family are eating. Carefully read the labels and buy from supermarkets that sell organic foods without GMO’s!

There are 1.5 million people diagnosed each year in the United States with cancer. Some of our foods as well as pesticides are contributing factors to this growing number. Enclosed are a list of some of the many foods that may surprise you as potential sources:

1.     Canned tomatoes have acid that leech BPA from the lining of can. BPA is a lining placed in almost all canned foods. Bisphenol-A, or BPA.  This can affect the way genes work in the brain.

2.     People who consume more than one soda pop per day had a higher risk of stroke than those not drinking soda.  The sugar causes blood sugar to spike leading to inflammation and insulin resistance. There can be an increase in gastric reflex.  Artificial food colorings and food chemicals like derivative 4-methylimidazole (4-MI) create stomach ulcers and pain.

3.     Farmed salmon makes up 60% of salmon consumed in the USA.  Fish are fed chemicals, antibiotics, pesticides, and other known carcinogens. They live in crowded conditions and have more sea lice. There is less omega-3, higher levels of PCB’s, mercury, and cancer causing dioxins. Always try to buy sockeye salmon that is healthier.

4.     Processed meats like sausages, hot dogs, bacon, lunch meats (bologna or pimento loaf) contain chemical preservatives, including sodium nitrates. When meats are smoked, there is tar present which is a known carcinogen.

5.     The microwave popcorn bag is lined with a toxin called Perfluorooctanic Acid (PFOA). This has been linked to infertility in women, kidney, bladder, liver, pancreas and testicular cancers. Soybean oil with the preservative propyl gallate cause stomach problems and skin rashes.

6.     Potato chips are high in calories, fat and have trans-fats that create high cholesterol and excess sodium, which increases high blood pressure.  The chips are fried at a high temperature that creates a chemical  called acrylamide, another known carcinogen.  Better substitutes are baked potato chips, air popped popcorn and whole wheat pretzels.

Looking at the relationship between poor oral health and Alzheimer's Disease.

Can The Use Of Anti-depressants Increase The Risk Of Dental Implant Loss?

If you are taking certain anti-depressants for treatment of depression, you might have an increase risk of implant failure.